Op-Ed: Why so many teachers quit, and how to fix that

Every year, thousands of young and enthusiastic teachers all over the country start their first day of work. Within the following five years, at least 17% of them will leave the profession. Teacher attrition is especially high in poor, urban schools, where on average about a fifth of the entire faculty leaves annually — that's roughly 50% higher than the rate in more affluent schools. 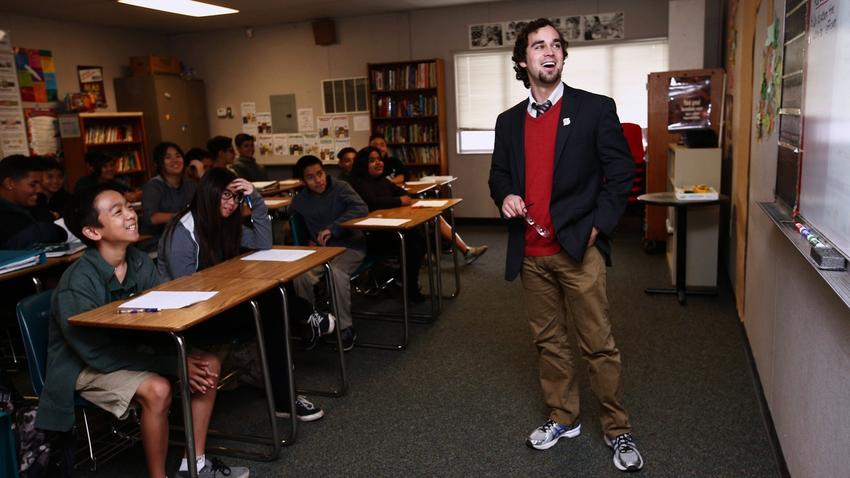 A teacher interacts with his students in an eighth-grade English language arts class at the College Connections Academy in San Jose, Calif. in February.(Gary Reyes / TNS)

Not only is recruitment and retraining expensive, costing the United States about $2 billion each year, but research also shows that teacher stability is crucial for building strong relationships between staff and students. Reducing attrition among new hires is especially urgent in California, where about a third of teachers are expected to retire in the next 10 years. Meanwhile, fewer graduates are lining up to replace them. In 2001, 77,700 graduates were enrolled in teaching programs in California. By 2012, that number had dropped to 19,933.

What's pushing so many teachers out of the profession? Richard Ingersoll, a professor at the University of Pennsylvania, has been trying to answer that question for years. He's found that teachers often cite long hours and low pay as contributing to their dissatisfaction. But teachers are even more upset by their lack of say over key decisions affecting classrooms. Volumes of other research echo this theme. In a 2014 Gallup Poll, teachers ranked last among 12 professional groups in agreeing that their opinion at work matters.

Politicians have tried to solve the country's teacher attrition problem by giving bonuses to teachers working in high-poverty schools or tying pay to standardized test scores. But recent research shows that such approaches have been mostly unsuccessful. Perhaps giving teachers more power could make a difference where other interventions have not.

Consider the case of Mission High, an urban, low-income school in San Francisco where I spent four years following teachers and students. In 2001, it lost 34% of its teachers — more than any other school in the district. By the 2013-14 school year, Mission was losing only 7% of its teachers. And it is now the only school in the district with a large African American, Latino and low-income population that is not considered "hard to staff."

What happened? The district and school administrators had previously tried mass staff firings and tougher accountability measures, to no avail. Then, in the early 2000s, it tried supporting teachers instead of cracking down on them.

The school principal increased paid time for teachers to plan intellectually engaging lessons together, design assessments to measure a broad range of skills and analyze outcomes to adjust instruction. Teachers made videos of students talking about what kind of teaching helped them succeed. They read research about how integrated classes, personalized teaching and culturally relevant curriculum increased achievement. And they asked successful teachers at their school, rather than consultants, to coach colleagues who needed help.

A small number of teachers also created what they called a "research and action group" to comb through quantitative and qualitative data, investigate the root causes behind achievement gaps and then design action plans to close them. Teachers looked at grades and attendance data disaggregated by race, ethnicity, income and special needs. They analyzed student work and interviewed students to find out how to improve instruction.

Teachers weren't the only beneficiaries of Mission's experiment; as teacher morale and retention rates went up, student achievement rates did too.

College enrollment went from 55% in 2007 to 74% by 2013, even though 75% of students were poor and 38% were non-native English speakers. The graduation rate went from among the lowest in the district, at 60%, to 82%. In 2013, the graduation rate for African American students was 20% higher at Mission than the district average. And in a recent survey, 90% of students said they like the school and would recommend it to others.

Nationally, the sort of school-based professional development that's working at Mission is difficult to sustain, because American teachers have heavier teaching loads than educators in many other countries and very few hours (three to five in most schools) allotted for learning and leadership. By contrast, teachers in Finland, Singapore and South Korea spend from 15 to 25 hours each week working to improve their craft.

Too often, government dollars earmarked for professional development end up going to new administrators or external consultants, not to programs empowering classroom teachers. Most schools still operate under the outdated factory model of labor division: Educators teach while bureaucrats and consultants design solutions for fixing their classrooms.

Under the No Child Left Behind Act, the United States concentrated most of its resources and attention on building up external accountability systems, tests and teacher evaluation forms. But judging from Mission High's success, we'd be better off building up teachers.

Kristina Rizga writes about schools for Mother Jones and is the author of "Mission High: One School, How Experts Tried to Fail It and the Students and Teachers Who Made It Triumph."