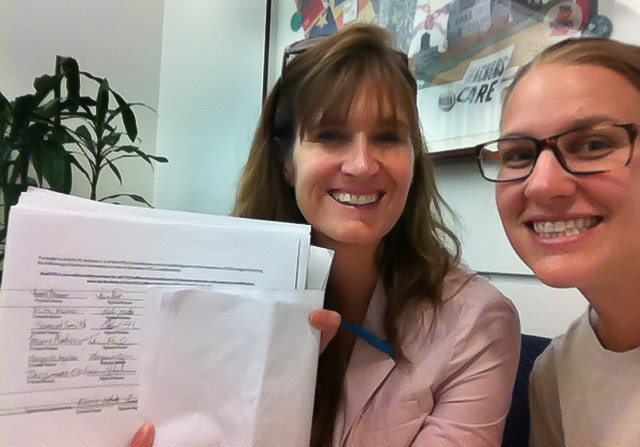 Teachers think of voting as a powerful civil rights issue. Yet less than 20% of teachers union members voted in the last officer elections for United Teachers Los Angeles (UTLA). Many members feel disenfranchised and discouraged from becoming involved, and opportunities for participation are often undemocratic, chaotic, and cumbersome.

Teachers Marisa Crabtree and Megan Markevich have a solution. They are promoting online voting and electronic caucusing for members. Online voting provides more reliable, more accessible, and more timely elections than conventional paper balloting can provide — at a fraction of the cost.

Crabtree, an English and Choral teacher at Abraham Lincoln High School in East Los Angeles, yearned for an active voice in her profession, and had been the union rep at her school. Elected to the UTLA House of Representatives, she observed that “meetings seemed chaotic and disorganized.

“Typically, we received a list of 135 agenda items without adequate time to review them much beforehand. The same people rose to obstruct meaningful discussion, time and again. After two and a half hours, only three items had been discussed and voted on, and rarely ones that did anything to improve our lives or our profession as teachers.”

She met Markevich, an 8th grade English teacher at Luther Burbank Middle School in Highland Park, at a UTLA Budget Committee Meeting one evening last year. “Before then, I’d get involved in the union, get jaded and quit out of frustration, and then get involved again,” Markevich remarked. “It’s hard to sustain motivation when it’s such a huge challenge to make any kind of impact. Any meaningful discussion and debate on important issues is constantly blocked.”

While working on the UTLA budget, Crabtree and Markevich began to realize that the cost of holding elections among union members was prohibitively high — nearly $350,000 during the last officer election. Meanwhile, only 6,000 of the more than 40,000 UTLA members even cast a vote for president in the last election. “It seemed to me it shouldn’t cost that much,” said Markevich.

“That’s terribly expensive for such a low response,” added Crabtree. “Especially when you consider how many ballots are delivered to the wrong address, or ignored because they are mistaken for junk mail. Online ballots are more reliable, since teachers these days change their home address or school location much more frequently than they do their email address.”

“Paper balloting, like paper banking, is simply riskier, more expensive, and less secure than taking care of things online,” Markevich notes. “Every time you add another pair of hands, or another pair of eyes, you add more ways for a paper ballot to ‘go wrong’ or to get lost.”

A switch to online elections requires a change in the union’s constitution, which can be done by paper ballot if the initiative receives 500 member signatures in a three-month period. The outlook was promising when, over the summer, the pair gathered more than 650 signatures.

But UTLA President Warren Fletcher pushed back, pointing out that the initiative would require a special election that would conflict with the upcoming officer elections. Crabtree and Markevich decided to comply with the wishes of union officers and the board of directors and withdraw their petition, with a plan to re-apply at a less controversial time.

“The point is to simplify participation while making it less expensive,” Markevich says, “so we decided re-coordinating our efforts with the winter leadership elections in 2014 would give the initiative better exposure and a better chance of passing.”

Now Crabtree and Markevich are re-gathering sufficient qualified signatures to mandate a paper vote regarding online voting. These petitions must be submitted by January 28, 2014.

“It’s frustrating to start the signature-gathering again,” says Markevich. “We’ve already received the enthusiastic support of so many people, it’s hard to ask again. But this will give us more time to tell other teachers about the issue.

“We are passionate about streamlining participation in the union,” she adds. “Bringing greater access to our fellow educators will strengthen the union and help our profession move forward. In the end, this will improve the lives of our students, too, by generating more discussion and participation among the teachers in the union.”