How California can entice young people back to teaching

Think your child's teacher is terrific? Or terrible? Just feel fortunate the kid has a teacher at all.

How California can entice young people back to teaching 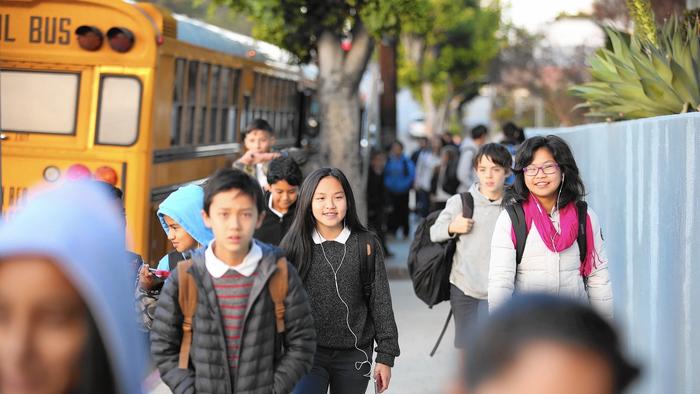 Think your child's teacher is terrific? Or terrible? Just feel fortunate the kid has a teacher at all.

It's getting harder and harder to attract college students to teaching. That's frustrating for public schools, because there are plenty of job vacancies and a growing shortage of qualified applicants.

The problem is a national one, but it's especially troublesome in California.

Districts are trying to hire because, for one, there's a drive to reduce class sizes. Then-Gov. Pete Wilson lowered them in the late 1990s. But Sacramento slashed funding during the recession, many teachers were handed pink slips and classrooms got overcrowded again.

California has had the nation's highest student-teacher ratio for years.

In 2013, it was 24 to 1, compared with the national average of 16 to 1. During the recession, some high schools jacked up classes to 40, according to a recent report by the Stanford-based Learning Policy Institute.

To return to its average pre-recession class size of roughly 20, California would need to hire 60,000 new teachers — more than triple the number it signed up in 2014. To reach the national average, it would have to hire 135,000.

Last year, there were nearly 43,000 teacher vacancies advertised throughout California.

The worst part is that schools often are cutting corners by hiring teachers who are not fully credentialed, including some still in training and unprepared for the classroom. Substitute teachers also are being brought in full-time for maybe a month, then replaced by another sub. Standards are reduced. Courses are canceled.

And the hardest-hit, of course, are the schools least appealing to teachers — often in high-crime areas and typically with lots of children from low-income families, including kids struggling to learn English.

Not really the schools. Yes, you can justifiably complain about needed reforms. But schools take orders from politicians.

It's a public education system, after all. The public pays the bill. And the public is in charge if it cares to be — if it cares enough to exercise its power when electing politicians.

Californians collectively have not been making teaching a very attractive profession, not like it once was.

Some politicians in Sacramento are very concerned. Last week, they proposed legislation to try to make teaching more enticing.

My favorite bill is one by Sen. Fran Pavley (D-Agoura Hills), a former middle school teacher. It would reinstate a student loan forgiveness program that was eliminated during the recession.

Pavley's proposal would require teachers to spend at least four years in a school with a large proportion of disadvantaged students, or in a rural school with lots of staff vacancies. The teacher also would be required to demonstrate financial need.

If it were me, I'd forgive loans — an evil thrust upon students basically only in the last generation — for anyone going into teaching. But Pavley's bill, she has estimated, could cost $80 million annually. And good luck trying to coax tightwad Gov. Jerry Brown into approving that.

"I think it would be a huge — absolutely huge — incentive," Pavley said. "In my little neighborhood alone, I know of two families whose children, ages 25 to 35, have moved back home to pay off their student loans.

"Lots of people going into teaching used to come from middle-class families. But these days the middle class is really getting hammered by student loan debt. Teacher salaries have never been great. You could make it on two incomes, but not one. Now you've got to pay off student loans, up to $1,000 per month."

A bill by Sen. Ben Allen (D-Santa Monica) would create a "teacher residency" program. Novices seeking a credential could do classroom instruction under the tutelage of a veteran teacher. There'd be a state grant for teacher stipends.

"If trained by an experienced mentor," said Allen, a former school board member, "the novice would be far more likely to stay in the profession."

A bill by the Senate education committee chairwoman, Carol Liu (D-La Cañada Flintridge), would reestablish a previously cut entity that served as a one-stop shop for potential teachers. It provided information about credentialing requirements and job opportunities and also had a recruiting unit.

"People don't go into teaching to get rich," said Liu, a former high school teacher. "Most go into it because they love to teach. And we want to encourage them.

"We've had a 75% decline in the last decade of people going into the field."

And why is that? Several reasons.

Many would-be teachers went through all the training and couldn't find a job during the recession. They saw young teachers getting laid off. Teaching no longer seemed like a very secure profession.

Teachers also tend to get blamed for all of society's ills, including parents who don't motivate their kids. Grading papers late at night isn't fun either.

And there are those student loans — maybe $30,000 — with starting salaries of around $45,000 after five years of college. That's sort of insulting. Yes, teachers get summers off, but without pay. And California retirees don't get Social Security.

Plus, here's a biggie: When she graduated from San Jose State in the 1960s, Liu recalled, "there weren't a lot of opportunities for women. You could either be a nurse, a secretary or a teacher. Not many were doctors and lawyers. These days women can be anything they want."

California needs to adjust to that 21st century reality.